From property to swimwear, Snow Patrol to networking

“I do a lot of swimming and was getting frustrated with the lack of choice in the Irish swimwear market. My sister had just moved back from Byron Bay in Australia and was raving about the sustainable lifestyle there. We put the different elements together during lock down in January and came up with a new venture called Kahm Sustainable Swimwear. We currently do swimwear for ladies, men and young girls and hope to expand into further categories soon. Our next collection is launching around Halloween".

A DONEGAL woman has responsibility for all legal affairs at a company which currently has more than €2 billion of property assets under management and development.
Sally Anne Sherry is a Senior Executive and General Counsel at Bartra Capital Property Management Limited.
The company covers all aspects of property in Ireland from nursing homes, social and affordable housing to renewable energies.
The past few months have been busy for her and Richard Barrett’s Bartra team who recently sold the Donegal Boardwalk Resort for a sum in excess of its €3.8 million asking price.
It’s Tuesday afternoon and she is getting babysitters organised before travelling to Belfast later in the day to attend a Snow Patrol concert with her husband.
The Gartan native is also secretary of the Donegal Dublin Business Network (DDBN) and had organised an evening with Magee 1866 in their South Anne Street Store for later that week.
Earlier this year Sally Anne and her younger sister Áine launched a new venture called Kahm Sustainable Swimwear and their next collection is launching around Halloween.
The mother of four young children (the oldest celebrates her ninth birthday this week) had her fortieth birthday earlier this year. It’s a busy time.
“It is always busy but a good routine is key. The children are all in bed by 8pm which usually frees up a few hours at night to let me catch up on work and other interests like the DDBN and a few board positions that I have. The weekends are completely dedicated to the children and we are often found at the beach in Donegal or at the side of a GAA pitch,” she said.
Sally Anne’s parents James and Grace Boyle live in Gartan. The eldest of five, her brother Jamsie and sister Áine are home in Donegal, Gráinne is in Dubai and Timmy lives in Glasgow. 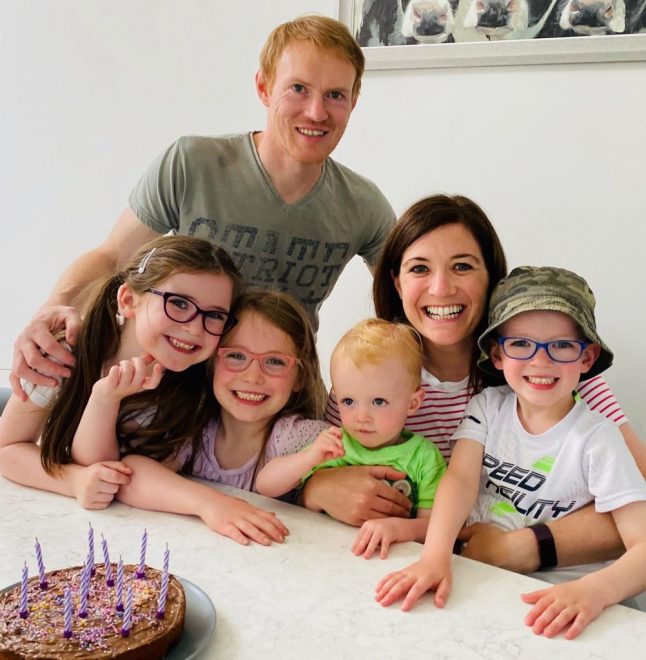 Her husband, Eamonn Sherry, played GAA for Fermanagh and the couple have four children – Kate (8), Anna (7), Hugh (6) and Mark (2).
A competitive swimmer with the Swilly Seals for many years – she swam for Ulster in 1993 – Sally Anne likes to keeps fit with pilates and spinning while she still swims a lot with her children.
“I felt like a bit of a crock after having the four children so I’m still trying to find my core,” she laughs.
A former pupil in Termon National School and Loreto Convent, Letterkenny, Sally Anne went to NUI Galway to do a bachelor degree in Corporate Law and postgraduate LLB. She graduated first in her class from Galway and took up a solicitor training contract with Matheson in Dublin in 2005.

In 2010, She moved to an in-house role with Treasury Holdings which was a major property development company with offices in Dublin, London and China.
It belonged to Johnny Ronan and Richard Barrett and had built many of the most iconic buildings in Dublin including the Convention Centre Dublin, Spencer Dock, Central Park in Leopardstown, hotels, offices, residential blocks.
“The Government had set up NAMA in 2009 and Treasury’s debts had just moved into NAMA when I joined. In hindsight maybe the writing was on the wall, but I had two and a half years with Treasury before it was placed in liquidation in 2012,” she said.
After Treasury was liquidated, she worked for Johnny Ronan in his family office on and off for a few years.
“I spent a year back in Donegal when our second child arrived but quickly felt the pull back to Dublin. Johnny was fighting hard to get his loans out of NAMA and he ultimately succeeded when he repaid them all to NAMA in early Summer 2015.
“I led that legal transaction for him. It was one of the most complicated transactions that I have ever managed with 13 different law firms and multiple jurisdictions involved. Johnny is a very smart man – look at him now – back at the top,” she said.
Richard Barrett was the other half of Treasury. He had been living in China and decided to establish a property company in Dublin in 2015. Sally Anne was asked to come on board as General Counsel (the company’s chief lawyer).
Bartra started out with a serviced office in the Harcourt Centre in 2015, bidding on properties and loan portfolios with Barrett’s backing. Now, six years later, their head office is in Dublin with over forty employees and they have sister offices across China.
Sally Anne sits on the Senior Management Team and leads the Legal Team. One of the solicitors on the team is Helen Deignan who is originally from Letterkenny and who Sally Anne swam with for many years in the Swilly Seals!
The Legal team manage all of the transactions across the Group and Sally Anne is also a director of all of the companies in the Group.
“Bartra have built nursing homes from the ground up and we operate them ourselves. We are incredibly proud of our nursing home team, who had a very difficult year last year. We were the first developers in Ireland to achieve planning permission and to build a co-living development – the first one will be open to residents in 2022 in Dun Laoghaire and operated by Niche Living by Bartra,” she said.
Earlier this year she launched a swimwear company called Kahm Sustainable Swimwear. How did that come about?
“I do a lot of swimming and was getting frustrated with the lack of choice in the Irish swimwear market. My sister had just moved back from Byron Bay in Australia and was raving about the sustainable lifestyle there. We put the different elements together during lock down in January and came up with a new venture called Kahm Sustainable Swimwear. We currently do swimwear for ladies, men and young girls and hope to expand into further categories soon. Our next collection is launching around Halloween.

‘Out of my comfort zone’

“I am really out of my comfort zone with online retail but I am loving the challenge. Áine is managing a lot of the day-to-day elements of running the business and I’m chipping in when I can,” she said.
The Donegal Dublin Business Network (DDBN) was established in late 2016 with its first meeting in Deputy Joe McHugh’s office (he was junior minister in the Department of Foreign Affairs at the time).
“Our first event was an evening with Jim McGuinness speaking in the Arthur Cox office and you could have heard a pin drop. It was the perfect start for the network – Jim is so motivational, positive and a great ambassador for Donegal,” she said.
From there, the DDBN committee continued to grow the network and to hold regular events across the city.
“We try to mix it up with morning events, evening events and then the annual Christmas dinner with all proceeds to charity.We are also hoping to go to a Finn Harps match in Dublin soon as a social and family event,” she said.
The Donegal Dublin Business Network has over 300 active members who support and refer business to each other and a committee of 13 people. Paul Doyle from Letterkenny is Chairman.
Sally Anne believes that every day is “a school day” and she hopes to keep learning on a personal and professional basis over the coming years.
“Also, I’m looking forward to watch our children grow and be happy – and make sure that they say a few Donegal words in every sentence,” she said. 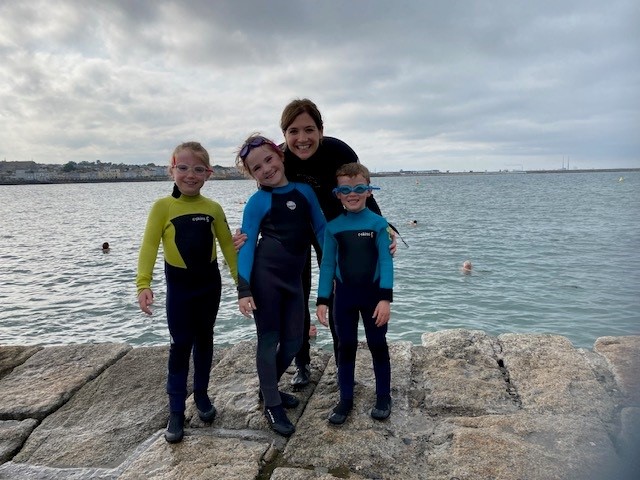